I recently attended the True Women Conference with Nancy Leigh DeMoss via simulcast. During the simulcast Nancy shared an illustration of a British evangelist from the 1860s, Gipsy Smith, who encouraged people to “Go home, lock yourself in your room, draw a circle around yourself, and pray fervently that God would start a revival within that chalk circle.”  Then Nancy, pointed out they have chalk circles around the auditorium for people to go pray in and she had a circle around herself at the podium; they were used throughout the conference. At the end of the conference, two men named Byron Paulus and Bill Elliff gave a presentation of their ministry movement called OneCry which is inspired by the teachings of Gipsy Smith. (1) (.1)Nancy Leigh DeMoss on Gipsy Smith 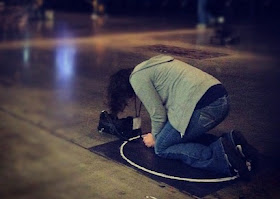 Seeing all this at the True Women conference gave me pause. The first time I saw circles like this in the church is from a book I saw being promoted on YouTube called The Circle Maker, by MarkBatterson, the Pastor of National Community Church in Washington D.C. Instead of calling people to revival, Mr. Batterson promotes a prosperity message that is centered on praying for God to make your hopes and dreams to come true by praying in a chalk circle or circling the promises in scripture. In his book and website, Mark Batterson, sites as his examples, Gipsy Smith and Honi the circle maker, a Jewish legend in the Talmud  who drew a circle on the ground and sat in it until God answered his prayer for rain. Sources: (2) (3).

Out of curiosity, as well as being alarmed at seeing such rituals being practiced, I decided to contact OneCry to find out more about these circles and see if they were aware of the occult ties to the circle. I received an email back promptly assuring me these circles are to help us visualize our commitment to God as well as give an outward showing  to God that we are repentant and want revival to start with us. Then the representative stated: “No occult connections”. The problem with OneCry’s premise for the circle is that it directly goes against the character of God revealed in scripture.

God knows our hearts, and we are desperately wicked. God tells us to repent and turn away from our sin and follow after him. A ritual circle is not what God tells us to do and goes against the fact that we can’t DO anything to please God or cause Him to act outside of His will. If we need a circle to remind us then perhaps we need to examine ourselves to see whether we are truly repentant of our sins.


It’s interesting that these practices are being promoted in Christian conferences and books being published considering there is no Biblical backing for such a practice. One can’t even twist scripture and say this is a prescribed way we are supposed to pray. The Bible says we are to pray according to God’s will, God’s Word also states positions in which to pray: standing, sitting, kneeling, bowing and with lifted hands. (4)

To go further, I looked up references in the Blue Letter Bible Concordance for “Circles” there were none, except for one reference to Isaiah 40:22 “It is he that sitteth upon the circle of the Earth…” If the practice of prayer in a circle is not Biblical, where do they come from? One does not have to look far; a simple Google search will find chalk circles have a long history in most religions, most notably in pagan practices such as Witchcraft and Gnosticism. Regarding witchcraft the author of The Magic Circle says:
"There is no aspect of ritual occultism more ancient or more essential than the magic circle. Indeed, it is difficult to find systems of magic that do not use the circle in some form, and when they are found, they seem incomplete and naked. The magic circle is older than Solomon, older than Moses, and occurs throughout the world in all religions and systems of witchcraft and thaumaturgy. It divides, excludes, protects, attracts, focuses, and concentrates, as these functions are needed by the magician. It is used not merely for evocations, but for invocations, for charging of talismans, for scrying, for projecting accumulated occult energy, and even for meditation. A correct understanding of the circle, not only how to project it, but what it signifies symbolically, is the most basic knowledge any magician can possess, and no magician can be said to know anything of importance about magic who has not mastered the use of the circle." -The Magic Circle by Donald Tyson


Matthew Henry put it best in his commentary regarding these rituals:

“Using arts of divination, to get the unnecessary knowledge of things to come, enchantments, witchcrafts, charms, etc., by which the power and knowledge peculiar to God were attributed to the devil, to the great reproach both of God’s counsels and of his providence, Deut. 18:10, 11. One would wonder that such arts and works of darkness, so senseless and absurd, so impious and profane, could be found in a country where divine revelation shone so clearly; yet we find remains of them even where Christ’s holy religion is known and professed; such are the powers and policies of the rulers of the darkness of this world. But let those give heed to fortune-tellers, or go to wizards for the discovery of things secret, that use spells for the cure of diseases, are in any league or acquaintance with familiar spirits, or form a confederacy with those that are—let them know that they can have no fellowship with God while thus they have fellowship with devils. It is amazing to think that there should by any pretenders of this kind in such a land and day of light as we live in.”

The words of Matthew Henry ring true even today, God’s revelation he has given us is clear. We are not to try to use outside forms or rituals to hear from God, we have His Word, The Bible. In His Word He has commanded us to not be involved in these practices.

We live in a sin filled world where evil always tries to find a way to sneak in so we need to be careful of what we do, what rituals we practice, especially if it is not something commanded in the Bible as a way of hearing and learning from God. The only rituals in scripture that God has given are the sacraments of communion and baptism.


According to the research I have done, there is nothing in scripture that supports praying in a chalk circle. It’s disconcerting that even after the Second Nicene Counsel deemed it a heresy practiced by the Gnostics it is still being practiced today. In the past 200 years we have had a resurgence of gnostic teachings come into the church through different movements; more recently in the last 50 years is the Charismatic Catholic Renewal Movement as well as Catholic Native Americans which call these circles Kateri Prayer Circles all of which use Gnostic teachings. (6)

The teachings of the Gnostics date back to the time of Christ, in the first century. In fact John, the author of 1, 2, 3 John, counters the gnostic beliefs that are being taught to the church by false (Gnostic) teachers in 1 John 1, 1 John 4 and 1 John5. In these references John is referring to the gnostic teaching that Christ did not come in the flesh something that was being taught by Gnostics in the first century. (7) John also states that that they are false teachers because they counter what Jesus said about himself as well as counter the eye witness account of the Apostles.
Just as in the first century, we encounter these false teachers. Romans 16:17-27 gives us instructions to have nothing to do with teachers who’s teachings does not line up according to the revelation of scripture that God has given us. (8)

Brothers and Sisters do as the noble Jew’s of Berea and search the scriptures to see if what I am saying is true (Acts 17:11). Take nothing on face value, just as it says in 1 Thessalonians, test all things. (Test what I am saying! Do the scriptures line up?) Do not practice something because it’s what everyone else is doing or because what a trusted leader says sounds good. The Bible tells us to have nothing to do with pagan practices as well as have nothing to do with leaders that teach it. The purpose of this article is a call to all believers especially Pastors to use your God-given discernment, line everything up with scripture before promoting it.


Father God, I pray this article brings Glory to you and that those who read it would search the scriptures and hear from you what the truth is bringing knowledge and understanding. The only knowledge we can have comes from you through your Word. In Your Glorious name, Amen